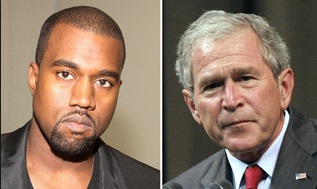 Kanye West – Controversy at its Finest

He’s no stranger to a bit of controversy, and 2015 has seen him storm out of more interviews and walk away from the paparazzi more than any other year. Maybe it’s all down to his ego that comes from being one of the biggest names in the music industry, but we’re sure that there’s more to Kanye than meets the eye. Here’s a look at some of his most shocking moments over the past few years!

Kanye’s first major act of controversy was during Taylor Swift’s speech where she won a well-deserved award in front of thousands of friends, fans and fellow celebrities for Best Female at the 2009 MTV Awards. Kanye took a different stance on the award however, and deemed it fit to climb the stage, take the microphone from Taylor Swift’s shocked grip, and then proclaim how Beyoncé should have taken home the award. A shocked Beyoncé received an award later in the show, and kindly allowed Taylor to finish her speech. Take that Kanye.

During a live presentation next to Austin Powers star Mike Myers, Kanye yet again shocked the world regarding previous United States President George W Bush. Kanye patiently listened to Mike Myers finish his fund-requesting speech, before butting in and claiming that George W Bush hates black people. A stunned Mike Myers took a second to react to what was said, before swiftly moving the conversation forward.

Although only mentioned briefly by the media, the incident involving Kanye’s faux-climb of the stage to re-enact his thoughts on another singer’s award (over Beyoncé) was met with laughs and boos in equal measure. The shock and relief on both Beyoncé and Jay-Z’s faces was enough to strike fear in to us ordinary folk, but thankfully Kanye decided not to be himself this time around.

It’s no secret that Kanye’s ex-partner Amber Rose is very close friends with comedienne Amy Schumer. So the lady of laughs took it up on herself to take a pre-empted tumble in front of Kanye and Kim Kardashian during a red carpet entrance. Ever the gentlemen, Kanye simply stepped around the fallen Amy and acted like he couldn’t care less. There might still be a bit of beef, but manners cost nothing. Anyway, he could have always helped her up on to her feet and then bad-mouthed her later on in the evening – that’s more his style.

Over the past couple of years, Kanye has found his presence being less and less demanded during festivals and concerts around the world. The new father is clearly a great dad – but a fan of the haters he isn’t. During the Bonnaroo concert recently, Kanye turned up 2 hours late and didn’t perform until after 4:30am. This was met with boos and hisses from the tired audience, and the rapper even took to Twitter the next day to lambast those that dared oppose him!